Warning:- Go to the toilet and then get yourself a coffee before beginning to read. This is long.....


I didn't get a new personal best but am still very happy with this time. I was only 4 minutes faster in Valencia and that course was almost as flat as a pancake. The Madrid course was like a rollercoaster ride in that you reach the top of a hill and run down the other side, turn a corner and there's a steep hill waiting for you!!

I got all my equipment ready the night before which was the usual outfit of the orange Running Copenhagen t-shirt, my nike shorts, Nimbus 12 Asics trainers, knee supports, Sis gel belt, running underwear, 9 gels, and all the other bits and bobs I might need.

I woke up at 6.30am and was out of the hotel by 7.15 as I was going to meet my friend Ciry from San Diego who I would be running the marathon with. She is so cool and was dressed up as Supergirl!!
We went down by the start and waited outside the Town Hall where we meet many other bloggers and had lots of group photos taken by complete strangers :-)

At 8.30 it was time for the usual 20 minute wait for the port-a-loo (which was already disgusting), and then we went up to the start of Corral 5. That's where we found our friend Greg from South Carolina, and another of Cirys friends.

By 9am the marathon had started but we were still waiting. I think it took around 10 minutes for us to cross the start line. Yippee!! Then we were off!

I was a little quiet for the first 2 or 3k and then I hit my high and wouldn't stop talking. Ciry is the opposite and didn't want to talk at all. 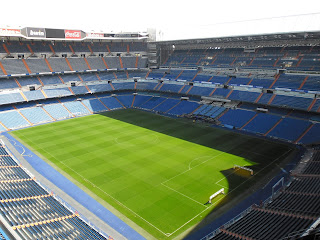 At 3.5k we ran past the fantastic Real Madrid stadium 'Santiago Bernabéu' 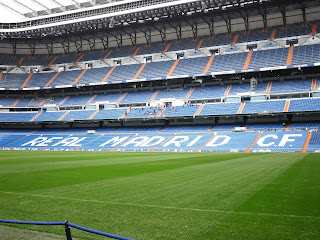 At 15k I really needed a toilet stop so went into a port-a-loo again. This one was so disgusting I had never seen anything like it before. When I came out I sped up my pace so I could catch up with Ciry before we got to Puerta del Sol. I managed this with only a minute to spare. As I zoomed past one of the bands while on my way to catch up they shouted out 'Vamoss Copenhagen Vamoss :-) 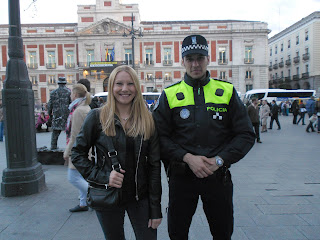 As we just left Puerta del Sol I saw the policeman that I had had my photo taken with a couple of days before so quickly stopped to say hello before I went on my way again. 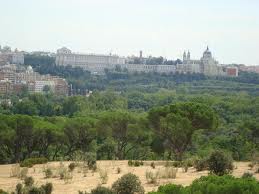 I was still going strong up to the 25k marker which is when we headed into the Casa de Campo area. There was not much going on here except a couple of 'nice' hills to climb! I said to Ciry that I'd meet her at the 30k drinks station so we can play our mental game. In the meantime I just put my head down and kept saying to myself 'climb the hill, climb the hill'. This seemed to work.

At the drinks station I waited for Ciry (she was only 40 seconds or so behind me). We said good morning to each other, had a drink of water and some Powerade, then decided it was time to have a nice 12k run. A guy at the drinks station kept saying 'go, go'. He didn't know, of course, that what we were doing was using our mental training to help trick our bodies into thinking we were just starting the days run. It sounds weird but I've done it in all 3 marathons now and it really helps. After 2 minutes we were off again.

At around 35k the course changed. Instead of going up and down now we were just running up and up and up. It was never ending!!

Somewhere between 32k and 36k (not sure where) I badly needed a toilet stop again. I couldn't find a port-a-loo but did see a cafe that was open. I run inot it shouting 'el banjo' and they very kindly let me use it. Once again, when I came out I ran a little faster to catch up with Ciry.

At 38k I knew I needed to just put my head down and go. I said to Ciry that I'd see her at 40k or at the end. I put Will Smiths 'Getting Jiggy with it' in my ears and was soon happily singing away while still running up that damn hill! 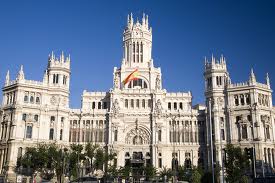 At 40k we were back by the Town Hall and there were so many people cheering everyone on. It was at that point that a great big smile formed on my lips and stayed there for nearly 2k. I must have looked like the cheshire cat in Alice in Wonderland!

At 42k I could see the finish in sight!! I sped up my pace and clapped high above my head and, of course, all the Spanish spectators did the same! I love the Spanish!!! 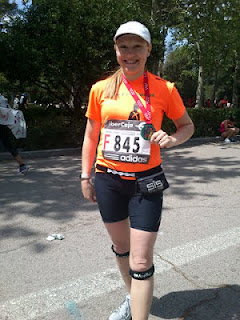 As I came over the finish line I raised my arms above my head. I was so happy :-) This marathon has been the best yet and Madrid is the best city I have visited!! My marathon choices just keep getting better!

And I still haven't 'hit the wall' in any of my marathons so I must be doing something right!!


For more of my photos visit http://www.marathon-photos.com/scripts/event.py?new_search=1&event=Sports/GKDE/2012/Madrid%20Marathon&match=f845
It is no longer possible to save 'official marathon-photos' as they are protected by copyright :-(
(I look in pain in most of the photos)

Greg, Ciry, her friends, and I are all going to run a spring marathon in Europe together next year to celebrate Cirys birthday :-) (Dubai will have to wait until another time). The best part is that we are ALL going to dress up as Super Heroes for it!!!
Posted by Unknown at 10:59