My Experience of Copenhagen Marathon!!

I finished Copenhagen Marathon in 4 hours, 43 minutes and 33 seconds!!! 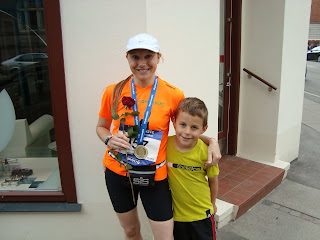 First I want to say that I had a fantastic first marathon!! I enjoyed it very much and would gladly repeat the experience again :-)

I arrived at the start area at 8.50am on the morning of Sunday 22nd May 2011. The atmosphere was already charged with nervous energy.

After a quick trip to a friends home to borrow the toilet, (the queues for the ones in the start area were REALLY long), I found the 4:30 pacesetters and lined up with them.

The weather seemed to be a bit of everything. There was sun, rain, clouds and wind but it was actually quite pleasant to run in :-)

At 9.30am the first runners set off on their marathon. I, on the other hand, still had a 15 minute wait to pass the start line. As usual the pacesetters went off way to fast so I decided to ignore them and run my own pace of around 6:20. 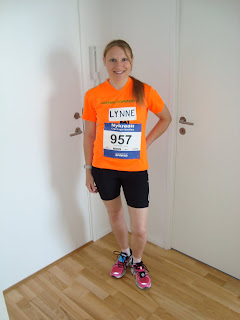 When I reached Rådhuspladsen (the town hall) at 2k Lena from Running Copenhagen Sightseeing Tours was there to cheer me on with some others and also the Running Copenhagen car. I was running in one of their BRIGHT orange T-shirts so it was easy to spot me :-)

I then headed off towards Nørreport and Østerport train stations and then on into Østerbro itself. After this I was running in Nørrebro where there were some fantastic people cheering us all on :-) 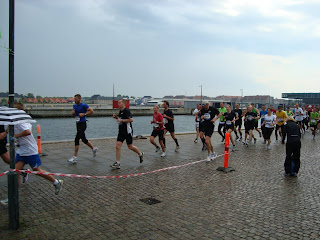 Then it was back into the city and up towards Enghave. Around 12 it started raining but didn't last long so it just cooled me down a bit. I did have to take my name off my top though as the ink had started to run and was going everywhere.

Once at Enghave I had run 20k and was still going strong and trying to keep my pace somewhere around 6:30.

At the drinking stations I was either having one energy gel with some water and one energy drink, or just having an energy drink. I took a lot of my gels in the first part of the race because I knew it was important to take them before you get into trouble. 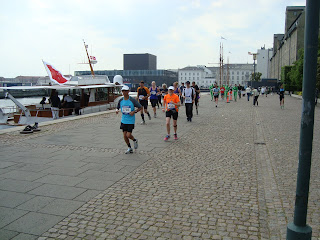 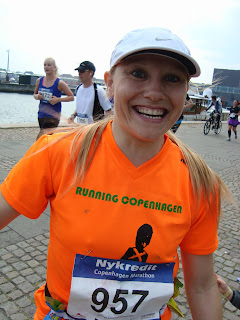 At 23k we started doing my favourite bit of the course which I have trained alot. This was from Fisketorvet, through Nyhavn and all the way along the water front to Kastellet.

At Amelienborg Slot, which was 26.5k into the marathon, my wonderful husband and my two boys were waiting for me :-)
My husband said I looked so fresh compared to many other runners that had come past them!
I then gave them all a kiss and carried on my way!

After the 28k point I found I had to concentrate more on my running and breathing. I decided to use a strategy that I had read about in my training book.

This I started to use at 30k. I told myself that I was now starting a 10k race! I knew if I could get to 40k where my 8 year old son was waiting to 'run me in' then I would finish no problem. So the next two water stops were at ca. 3.6k and 8.2k in my mind and my son was at the finish line that just happened to say 40k on it :-)

This worked SO well and I am in no doubt that using this idea made the final 12k so much easier for me. 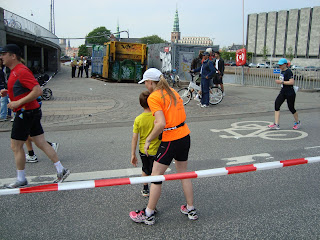 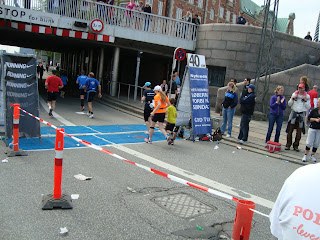 At 40k my son joined me and we had a gentle run up to just past the 42k mark. Here a VERY mean official told me that my son wasn't allowed to cross the line with me even though it was only 100 metres away! Not impressed!!

Anyway my son stood over by the side and, because I wanted to get back to him as quick as I could, I sprinted the last 100 metres as fast as I possibly could :-)
I must have looked very strange!
I got my medal, went back to my son and we spent the next half hour eating and drinking.

What happens now this project is finished? I'm, of course, already deciding which marathon to run next!!!
Posted by Unknown at 10:09